A few weeks ago at the Illinois Reading Conference, I had the opportunity to add a bunch of books to Bubba’s signed books collection. I always enjoy adding to his collection, but I’m going to have to come up with a new place to keep them all because his collection is growing pretty big! 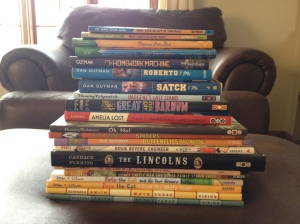 Some of the books that were signed for Bubba

There were a TON of amazing authors at the conference, including Mary Pope Osborne, Jon Scieszka, Eric Litwin, James Patterson, Andrea Beaty, Nic Bishop, Candace Fleming, and Dan Gutman! It’s hard not to be excited with a line-up like that… and whenever I have the opportunity to take a picture with an author, I always use my “excited face” (because my students get excited when they see how excited I am to meet an author)… so here are some of my favorites from the conference:

Besides getting books signed for Bubba and pictures taken with some amazing authors, I also got to listen to many of those authors talk about their books, their writing process, and their personal stories.

It was an amazing couple of days!

An Amazing Act of Generosity

A couple months ago I wrote a blog about how my Guys Read Club caused me to become a suspect in an armed robbery case. A lot of people seemed to like that post… including Bethany Barton (an author and illustrator from California).

After reading my blog, Bethany sent me a message on Twitter and asked if my Guys Read Club would like a signed copy of one of her books… and long story short, she sent the kids a signed copy her latest book, This Monster Cannot Wait! 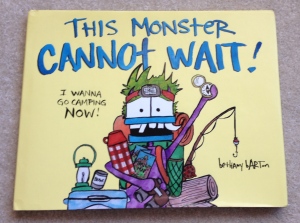 I don’t know of any other authors who would do something like this, so please consider visiting her website and supporting her!

If you have a chance today, head over to The Onmibus Publishing’s website… I wrote a guest blog about a revolutionary new service for parents that’s like Netflix (but instead of getting movies delivered to your door, you get LEGO kits)!  I’m not sure how long the post will be on their website, so go check it out!  Here’s the link:

When Not Following Directions Makes Me Happy

The following is a recap of the events that occurred the evening of Monday, January 27th:

It’s getting late and I’m starting to get upset at Bubba… I put him to bed quite a while ago, and I just heard him moving around out of his bed – AGAIN!

As I walk to his bedroom, I can’t help but think, “This is the third time I’ve had to go to his room and tell him to lay back down!  I’m getting sick of all this playing around when he should be sleeping!”

I open the door, turn on the light, and enter the room.  At this point, I am planning on using my “teacher-face” and scolding Bubba (because I expect to catch him playing with his toys)… but minutes later I’m walking away from his room with a huge smile on my face.

What happened?  Well… when the light went on, I saw exactly what he was doing – he was at one of his bookshelves trying to pick out a book so he could bring it back to his bed and “read” it with his reading lamp!

The look on his face was priceless… It was as if I caught him with his hand in the cookie jar!  He ran straight back into his bed, tried to get rid of the evidence that he was using his reading lamp, and pulled the covers up over his head.

At this point, how could I be upset?!  I walked over, pulled the covers down from his head, and gave him a big kiss on the forehead before turning out the light and walking away.

I’m sure he thought (and still thinks) that he was in big trouble because I caught him out of bed… but in all honesty, I couldn’t have been happier!  If he ends up being one of those kids who stays up late reading a book under his covers with a flashlight, I’ll be one proud papa!